Originally called West Shore Ranch, Spur of the Moment Ranch was founded in 1997.

When Ann and Skip purchased the ranch, it had the rustic camping cabins; four paddock areas and the open style barn. Also on the property was a barn and paddock for Maletzke’s horses and donkeys; a large garage; and small home which serves as office for the ranch. Ann and Skip were ready for a change back then; actually only happened upon the ranch by happy accident. By the time they left the property that first day Ann had named it Spur of the Moment Ranch because it truely was a Spur of the Moment decision to purchase it. That was on July 4th of 2000; by September 18, 2000 they found themselves resort owners in the north woods.

There was always an idea to expand the ranch, the expansion was necessary so that it could generate enough income to have a viable business. The early years were learning the business, planning for an eventual expansion and finally in 2005 the opportunity to expand came. They designed and built 4 D-log cabins with in-floor heat; propane fired fireplaces; full kitchens; bedrooms and great rooms; and bathrooms. All have covered porches for guests to enjoy the out of doors. Along with building the cabins; 5 independent campsites were developed and the addition of paddock space. The complete expansion took 2 1/2 years and was completed in 2007. The cabins were build by Skip; and their son Ben; and a friend, Brad with Ann doing a lot of finishing work.

More Than A Place To Sleep 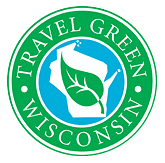 As the ranches reputation grew; and more and more guests were visiting and bringing their horses; Ann and Skip found a need to handle a growing problem of much horse manure. A horse will produce 50 lbs. of manure in a day. That adds up when their are many horses over several days. Since the ranches property is 12 acres; there was a need to manage that much horse manure. After much research, Ann and Skip decided to try vermicomposting. With the help of an investor; a compost system was purchased; and Maletzke’s took off for a two day adventure to Pennsylvania to bring home 5000 little red wiggler worms to devour our horse manure and make fabulous compost or “worm castings”. The new company was named Growth Spurt Compost. Guests are invited to tour our Compost Center on the ranch and to purchase some of great compost for their plants and gardens back home. This endeavor as well as other ranch practices has made the ranch a Travel Green destination.

Spur of the Moment Ranch is now Travel Green certified, has been for the past few years. Through use of our in-floor heat and on demand hot water which is a huge savings in energy costs, we began looking at other green initiatives to bring to the ranch. Now a vast majority of our cleaning products are green, there are body wash and shampoo dispensers in the cabins and bathhouse to reduce waste. Our bar soap in the bathrooms is organic and produced close by in Oconto Falls, and Michigan. Many visitors have appreciated that the old air fresheners are gone, many folks had allergies to the scents. 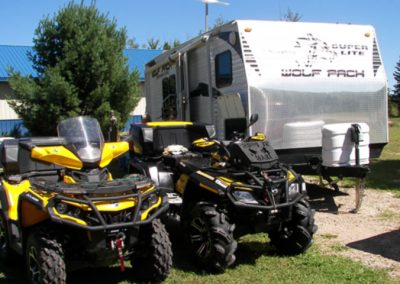 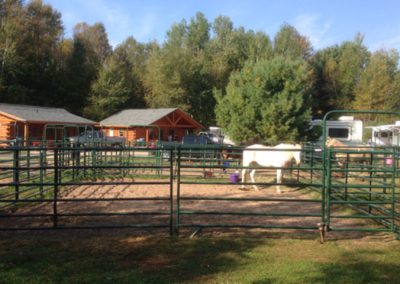 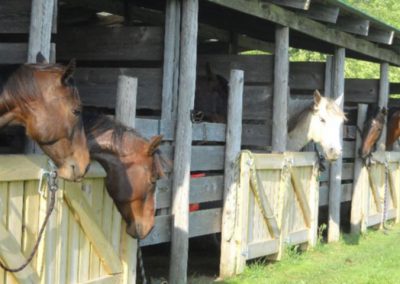 Room For The Whole Family
& The Horses They Came In On 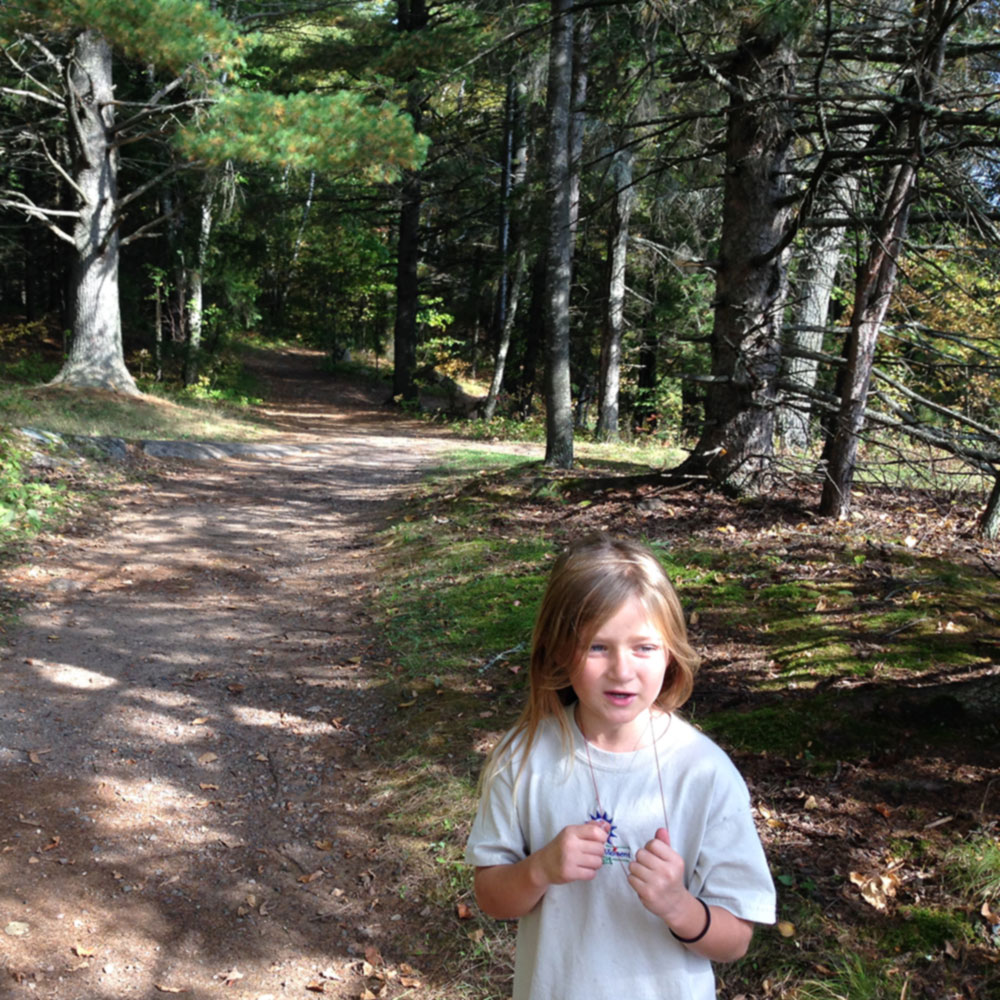 Spur of the Moment Ranch lies at the southern entrance to the Chequamegon-Nicolet National Forest. This gives us direct access to the Nicolet Trail.

The ranch itself is unique in its options for lodging offered to its guests. There are 4 log full housekeeping cabins; 4 rustic camping cabins; and 5 independent campsites for RV’s; living quarter trailers; and toy haulers. For its horse guests, the facility has an outdoor style barn with 19 box stalls; and 15 paddock areas interspersed around the ranch. The ranch is also dog friendly, with everything from feisty little Jack Russells to Saint Bernards and every size in between. Much thought has gone into the design and development of the resort to encourage comfort and relaxation for all of our guests. The variety of lodging offered at Spur of the Moment makes it convenient for family and friends to be together and yet have accommodations that meet most everyone’s needs. Spur of the Moment Ranch is a Travel Green Destination and a Choice Destination for Discover Wisconsin.

The ranch itself is 12 acres surrounded by forest land; near the Chute Pond Recreational area and Oconto River. The Ranch has direct access to the Nicolet Trail. This trail is an abandoned railroad bed that runs for 30 miles north and south; that has been revitalized into a multi-use recreational trail. It is from that trail that horses; ATV’s; UTV’s and snowmobiles access there own trails throughout Oconto County and into adjacent counties. To our west; folks can access the Wolf River; where there is great rafting and tubing; and to the east is the Pestigo River, another great rafting spot. Oconto County has beautiful lakes and streams for swimming; boating; kayaking; and fishing. The forest is abundant in wildlife; and offers hunting for many species including deer; bear; turkeys; grouse. There are a variety of rustic drives in the area that are popular with motorists and motorcyclists. 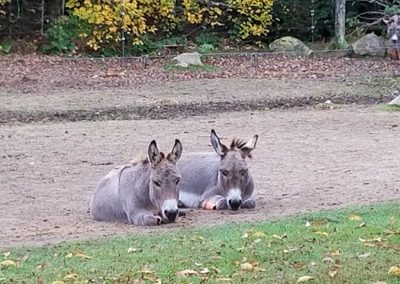 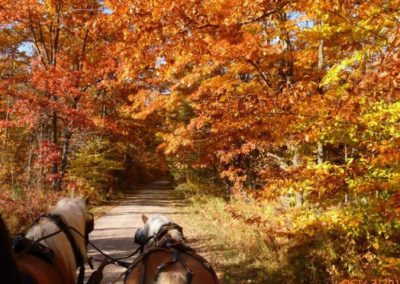 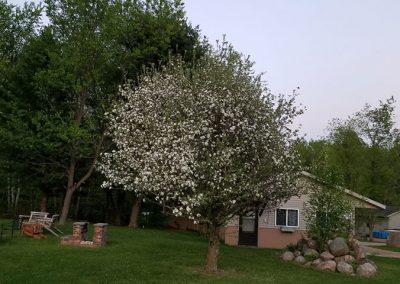 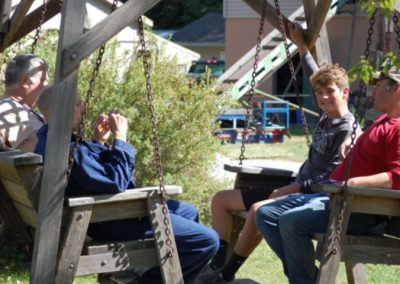 We'll  Be Happy To Answer Them